It is a great privilege to me to be a participant on this unique occasion, when for the first time in the history of the Potato Association of America, a man from beyond the seas, is to be honored by Life Membership in this Association. Dr. William (Bill) Black is a man known to many of you personally and to all of you by reputation. I know that we all regret that Dr. Black is not able to be here with us tonight, but I think that this colored slide of Dr. Black, standing beside one of his own greenhouses in Scotland, will add a little personal touch to this occasion and will be of particular interest to those of you who have not had the opportunity of meeting him personally. (A colored slide of Dr. Black was projected on a screen at this point. Ed.)

Bill was born on September 1. 1903 on a farm in Scotland, his ancestors having been farmers as far back as can be traced. Life on the farm was full of interest and hard work, and as he once stated, with his inimitable droll humor, in order to avoid some of the hard work, he continued his education. He attended Edinburgh University, graduating with a B.Sc. degree in Agriculture in 1925. During his student days, he qualified as a temporary inspector of potatoes for the Department of Agriculture for Scotland. This seasonal work provided valuable experience and further stimulated his work on the potato.

After graduation, he was appointed “Assistant in charge of Potato Breeding” at this widely known plant breeding institution. His work has been mainly concerned with research in the genetics of the potato, and with the breeding of new varieties. The breeding work has resulted in seven selections being registered as new varieties by the Department of Agriculture for Scotland. They are the Alness, Craig’s Defiance, Craig’s Royal, Craig’s Snow White, Craig’s Alliance, Pentland Ace and Pentland Beauty. In addition, Craigs van Riebeeck was named and approved in South Africa, while several unnamed blight resistant selections have been grown commercially in Tanganyika and Kenya. It is for his research work that he is best known in this country.

He has published about 30 papers, some of them under joint-authorship. He has been awarded, by the University of Edinburgh, the post-graduate degree of Doctor of Philosophy for his research dealing with “Genetical Studies in “Solanum tuberosum L” and the degree of Doctor of Science for his studies on “The inheritance of Resistance to Phytophthora infestans (Mont) de Bary in hybrid derivatives of Solanum demissum lindl.” Also for certain other publications, he was awarded the Makdougall-Brisbane Prize (1944-46) by the Royal Society of Edinburgh. In 1949, he was elected a Fellow of the Royal Society of Edinburgh.

It was during his visit to this country in 1953 that many of us became personally acquainted with Dr. Black. and it was during this same visit. that he received that highly coveted, but nevertheless award, the “Order of the Purple Top” for service behind a roto-beater in Wisconsin. (Dr. Black was injured slightly by a stone thrown from a roto-beater. Ed.)

I know that we were all greatly impressed hy Dr. Black, not only as a research worker but also for those personal qualities that endeared him to a great manv people in a relatively short time. It so happens that since that time I have had the very good” fortune of spending three weeks, as a guest of the Blacks, in their home in Edinburgh. There, I renewed acquaintance with his ebarming wife, Isobel, who has that happy faculty of making strangers feel entirely at home almost immediately upon entering the door: a hostess who is continually thinking of your comfort, whether it is by putting hot water bottles in your bed in the early evening, or serving you with some very tempting Scottish dish, which you have not tasted before. While there, I met his fine family of two boys and two girls. There I partook of hospitality at its very best, and I really became acquainted with Dr. Black as a man. I fotmd him to be a very kindly and an extremely modest individual, well-liked and highly thought of by all his associates, a man whom I don’t believe ever said an unkind word about any one in his life. No matter where we went. people were glad to see him. and he was always received with a noticeable degree of respect, which I believe, is (mh” meted out to one. held in very high esteem, both as an individual and as a recognized authority in his chosen profession. It is, therefore, with an especial degree of pleasure and a sense of real honor, that I present, in absenlia, Dr. William Black, as a candidate far Honorary ISle Membership in the Potato Association of America.

Reiner Bonde was born in Minneapolis, Minnesota and worked his way through high school and college. He graduated from Minnesota in 1922 with a B.S. Degree. While in college he held various positions: Assistant Plant Pathologist, USDA, Barberry Eradication work in 1919; worked on Grain Rust in Iowa and Minnesota 1920: Certified Seed Inspector for Minnesota; and was employed by the Nebraska Potato Improvement Association. in 1924 he received a Master’s Degree at the University of Maine and has been employed by the Maine Experiment Station since that date. He was Assistant Plant Pathologist from 1924 to 1928: Associate Plant Pathologist 1928 to 1947: and Plant Pathologist since 1947. A little time was taken in 1938 when he returned to Minnesota where he received his Doctor’s Degree. His thesis was entitled “Insect Transmission of Bacterial Diseases in Potatoes.”

Dr. Bonde has worked on and found the solution to many potato production problems. He has worked on degenerative diseases-how they spread, their effect upon yields and of utmost importance, how to control them. He was the first to describe and recognize bacterial wilt in Maine. Since then he has determined how it is spread, and found disinfectants to use on equipment to prevent its spread and has developed and tested thousands of wilt resistant varieties.

Dr. Bonde was one of the first to suggest isolated seed plots as a means of controlling both virus and bacterial diseases. As a result of Dr. Bonde’s work on virus and bacterial diseases the State of Maine Seed Board Farm was created to produce high quality seed for the Maine seed potato industry. His advice and counsel are a big factor in the production of 100 acres of top quality disease free seed on this farm.

He was the first to recognize that late blight spreads from cull flies under Maine conditions and developed materials and methods of controlling the disease. Hundreds of new fungicides have been tested in his plots for the control of this disease. Currently he is working on methods of forecasting late blight in Maine. Each year Dr. Bonde tests many seedlings for resistance to diseases especially late bright and bacterial wilt. He has worked on seed treatment for the control of scab, and rhizoctonia and more recently on the use of antibiotics for the control of seed piece decay and soft rot. He has written over 140 scientific publications plus many popular articles for local use. These are only a few of Dr. Bonde’s accomplishments.

It is very appropriate that Dr. Reiner Bonde should receive this Honorary Life Membership in the Potato Association of America–an honor he so richly deserves. 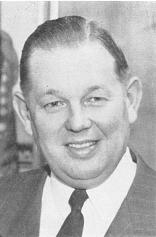 Frederick J. Meyer was brought up in \Vest Salem, Wisconsin, and graduated from the University of Wisconsin in 1932. He majored in chemical engineering. At the time of his graduation there were no jobs for a chemical engineer. His professor, Dr. Mathews, offered him an instructorship and urged him to continue studies toward a Doctor’s degree. The university was paying $70 to $80 per month for instructors and this was about half as much as Fred had been making selling specialty foods (and especially potato chips) from the back seat of his car while attending school. Fred and his young wife decided to continue their own business. This decision began a most fabulous career which, twenty-six years later, finds Frederick J. Meyer the president of a multi-million dollar corporation known as Red Dot Foods, Inc., Madison. Wisconsin.

Fred’s interest in research has remained from university days through the years. As a member and president of the National Potato Chip Institute, he assumed a leading roll in the organization of the Research Department of that institution. For eight years, as a member of the Potato Commodity Committee appointed by the Secretary of Agriculture, he supported the many research projects in the agricultural field, especially the work with potato breeding and genetics. He has always been interested, too. in the foreign potato imroductions that are being maintained at Sturgeon Bay. Wisconsin. From the start he saw that it is a waste of time and money to introduce a lot of material unless it is studied cytologically and genetically and evaluated for its disease reactions so that it can be used to advantage by the potato breeders. Although the recommendation of the committee was ignored for so many years, Fred never gave up. This was another obstacle to be overcome and by his talks and letters to certain key men in the U.S.D.A. he exerted a lot of influence in having funds appropriated for the Sturgeon Bay project.

In 1947, not satisfied with what was being clone for the chip industry in the federal and state potato breeding programs, he organized the Red Dot potato breeding project. Over the years many named and seedling varieties were tested in cooperation with the U.S.D.A., the Wisconsin Agicultural Experiment Station and a number of other state experiment stations. As a result of these tests, a few varieties were found that have met the needs of the company to a greater extent than the old standard varieties. However, these have certain undesirable characteristics that make them far from ideal and the Red Dot potato breeding program has been continued and expanded.

Fred’s business enterprises have grown from an investment of $22 in 1931 until in 1957 more than $10,000,000 worth of Red Dot products were sold throughout the Midwest. The vanning department operates 28 tractor-trailer units to keep the eleven factories supplied with raw materials and the 100 branch warehouses supplied with merchandise. The sales branches put a total of 200 route trucks on the road every working day to service the more than 35.000 retail outlets of Red Dot products. To supervise all the sales and production activities, Red Dot’s management team utilizes about 60 company cars and 2 airplanes. Almost 1000 employees comprise the growing Red Dot family.

Red Dot Farms cover 15,000 acres in Wisconsin and about 2,500 acres in Alabama, on which approximately 30 per cent of the potatoes needed to supply the anany factories are raised. Over one-half million bushels of potatoes can be stored in air-controlled potato warehouses located close to potato growing land.

Through the many stages of development and rapid expansion, Fred and his wife have retained the ownership of Red Dot Foods, Inc. He is President ; she is Secretary-Treasurer. They have two children, John, who is a senior at the University of Wisconsin and is on the Board of Directors of the company, and Carol who is attending the University of Colorado. Fred is to be congratulated on his election to the exclusive fraternity of Honorary Life Members in the Potato Association of America and the Association is to be congratulated for electing a man that has helped to improve not only the art and science of making chips, but has promoted research in every other branch of the potato industry.