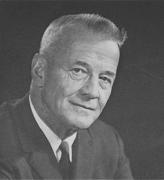 Mr. President. members of the Potato Association of America, and guests, it is a rare privilege for me to present my good friend, Mr. J. D. Swan, Jr., to you as a recipient of an Honorary Life Membership. Men like Jim are providing the progressive, thoughtful, and articulate leadership to the agriculture of our country today. His contributions to the improvement of the vegetable industry at local, regional, and national levels started nearly 60 years ago at Neosho Falls, Kansas. It was here that this man learned to love the land, the things that grow. Even during his high school days in Chicago, he was drawn back to Kansas to harvest in the vast fields of wheat and nurture his dreams of being a farmer.

I feel sure that Jim is the first graduate of Princeton the Association has honored. Things happened to him in 1925. First, he graduated with honors after taking courses that included philosophy, chemistry, and mathematics. Secondly, he married Edith Brigham and started his life’s work in Chicago. But after living there for a short time, Jim could no longer resist the urge of his boyhood dreams of becoming a farmer. He quite logically then moved to Delavan, Wisconsin, where he became one of the pioneers in the development of muck land for vegetable growing. It took real courage and conviction to develop his Turtle Valley Farms. during the depression years around 1932. In the years following, he did much independent experimental work on his farm and actively participated in the research on onions, cabbage, and potatoes being done at the University. It was here that he developed abiding friendship with Dr. J. C. Walker and the late Drs. Russell H. Larson and Gustav H. Rieman. Some of Jim’s own research has been published in our Journal, and I’m proud to report he has been a member for over a quarter of a century.

His willingness to share his knowledge and talents with others has been most generous. He pioneered the Wisconsin Muck Farmers Association, was its first president and continued to guide it as director for 15 years. He helped incorporate and revise the Wisconsin Potato Growers Association, served as its first vice president and later as president, and has been a director since its origin. His regional activities include his election as a North Central Potato Conmaitteeman. He has been an advisory member of the Board of Governors of the Mercantile Board, and he served as chairman of the Fruit and Vegetable Division of the Wisconsin Farm Bureau for four years. After serving on numerous committees and as vice president, the Vegetable Growers Association of America elected him president in 1955.

My friends, we have here in Jim quite a variety of potato! His pedigree is proven. He is adaptable to an ever-changing environment, and our entire industry has profited from his productivity. But there is a vital personality to this man. The Swan’s lovely and hospitable home has been blessed with three daughters — Nancy Belle, Emily. and Penelope, all married. Jim and Ede were once concerned about having only daughters, but not any longer, since the ratio is close to the expected 1:1 — six grandsons and five granddaughters. Jim has flown his own plane for about 20 years, and with characteristic thoroughness, possesses a commercial license with instrument rating.

He is truly one of our first flying farmers. I,eisure is also a part of this man — he loves all outdoor sports and has shared his enthusiasm for them with his family and friends for years. Swimming, skiing, and hunting seem to be his choice, as a participant, not a spectator. If he has a hobby, it’s flying, particularly to his Swanee Superior Farms in northern Wisconsin near Lake Superior.

It is with real pride and great personal satisfaction that I present Mr. Jim Swan to you to receive an Honorary Life Membership in the Potato Association of America. 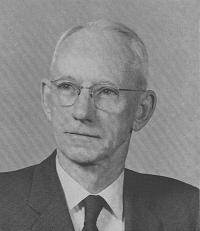 Doctor Auther H. Eddins was born at Keytesville, Missouri, March 16, 1893, and received his B.S. and M.A. degrees at the University of Missouri. He is a veteran of World War I. He served as a Sergeant in a Field Signal Battalion of the U. S. Army for two vears. One year of that service was spent in France. He was a Public School teacher and High Schoot Principal for 10 years in Missouri before going to Iowa State University where he received his Ph.D. degree in 1928. He joined the staff of the Agricultural Experiment Station, University of Florida, Gainesville. Florida. as an Assistant Plant Pathologist in 1928. Three years later he transferred to the University of Florida’s Potato Investigations Laboratory at Hastings, Florida, and became Plant Pathologist in Charge of that Laboratory in 1937.

Under Doctor eddins’ leadership and the cooperation of the potato and cabbage growers of Florida, the Potato Investigations Laboratory at Hastings has developed into one of the leading research laboratories of its kind in the United States with sufficient staff members, equipment, and other facilities to solve some of the major problems of potato and cahbage production in Northeast Florida.

Doctor Eddins is a member of Sigma Xi, Gamlna Sigma Delta and Phi Sigma, honor societies in science and agriculture. He also is a member of the American Phytopathological Society, Potato Association of America, Florida State Horticultural Society, and is a Fellow of the American Association for the Advancement of Science. He was an Associate Editor of Phytopathology and a member of the Executive Committee of the Potato Association of America for several years. He also has served as Vice President of the Florida State Horticultural Society in charge of the Vegetable Section. He received the Florida Fruit and Vegetable Association Scientific Award for outstanding research which has been beneficial to the potato growers of Florida. He was one of the technical workers who provided leadership in the development of the Southern Regional Potato Marketing Project, SM 5. He served as a consultant on potato production in Cuba in 1943 and in Venezuela in 1961.

Doctor Eddins is the author or co-author of ten bulletins of the Florida Agricultural Experiment Station and numerous articles published in ieading scientific journals in the United States. He has made important research contributions on the nature and control of destructive diseases attacking potatoes, cabbage and corn throughout the world. 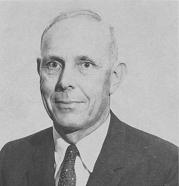 I am honored to present to the Potato Association of America for Honorary Life Membership, John Campbell, a man who has done snore for this Association than any other living member.

John Campbell, Editor of the American Potato Journal and Potato Handbook, Treasurer and Advertising Manager of the Potato Association of America, has worked for nlany years to keep our Association strong and growing. He has had constant deadlines to meet. Most of us in our work for the Association have relatively few times in a five-year period that we have the pressure of making the right decision for this organization. John Campbell has had this pressure every month for many years. He has successfully worked at upgrading the caliber of our Journal and yet not offended or discouraged research people. He has successfully worked at snaking our Journal one which is of value to growers as well as research people.

The people of New Jersey can readily tell you the tremendous value he has been to their potato industry. John has been Secretary of the New Jersey State Potato Association for 20 years and has written its monthly publication “Hints to Potato Growers” during this period. He is also a director of the New Jersey V~Thite Potato Industry Council.

John is Associate Plant Pathologist at Rutgers and has been in charge of research on all phases of potato production in New Jersey for over 20 years. We have been fortunate in having John at a University which allows him to spend so much of his work time as well as his hobby time on Potato Association business. We have been even more fortunate that John and his wife have been willing to put the time in
this effort.

I could go on and tell you of the problems he has handled tactfully and graciously but I don’t feel I need to. All but the youngest members of this Association know this man very well. All of you know deep in your heart that there isn’t a member who more richly deserves this honor.

Mr. President, ladies and gentlemen, I present John Campbell for Honorary Life Membership in the Potato Association of America.