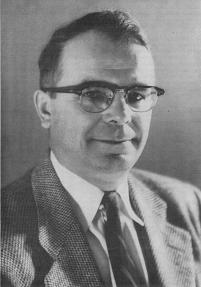 It is with pleasure that I present Robert V. Akeley to the Potato Association of America for Honorary Life Membership.

Bob was born in Presque Isle, Maine on October 13, 1910. He started his career with potatoes at an early age since he was raised on a potato farm in close proximity to where we are assembled. He attended the University of Maine, graduating in 1937 with a B. S. degree in Agronomy and in 1942 received the M. S. degree in Botany.

He has been associated with the Federal Program of Potato Investigations since 1932, first as a student-helper and later on a full-time basis. In 1942, he assumed the responsibilities for conducting the Potato Breeding Program at Aroostook Farm, Presque Isle, Maine.

In 1956, Bob was transferred to Beltsville, Maryland as leader of the National Potato Breeding Program and has been Leader, Potato Investigations, Crops Research Division, U.S.D.A. since 1960. He has been directly or indirectly responsible for the release of thirteen new potato varieties: Boone, Cherokee, Delus, Early Gem, Kennebec, Merrimack, Pungo, Plymouth, Saco, and to date the other four have not been named officially. Many valuable parents possessing combinations of desirable horticultural, processing and disease resistance characters also have been released under his supervision. His work in potato breeding has received international recognition, and he is the author of over eighty publications.

He has the outstanding ability to work cooperatively with others in potato breeding and variety evaluation. In 1966, he distributed varieties and breeding lines in 19 shipments to 11 foreign countries and to 53 cooperators in 33 states.

Mr. President, it is a privilege for me to present the name of Dr. Robert V. Akeley to the Potato Association of America for Honorary Life Membership. 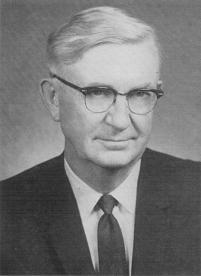 There are several reasons why I believe it is of great singular importance to be honoring this man. He has made contributions to the science of potato production in ways that will continue to have benefits for generations to come. He has had a long and distinguished career as professor of Plant Pathology at the University of Minnesota. During this time he has conducted research on potato diseases for nearly 30 years; taught graduate level plant pathology courses for an even greater length of time: and provided valuable leadership in the administrative affairs of the Plant Pathology Department. The Rockefeller Foundation and the FAO have both utilized his services as a special consultant on potato disease problems in the Latin American countries.

I could elaborate on many activities which would point out this man’s outstanding record. However I would like, in the few minutes I have been allotted, to highlight a few points which probably best illustrate why we are honoring this man. He has been described by his superiors as one of the very intelligent people in this world who has an extremely good perspective when it comes to scientific principles. This man’s sense of ethical responsibility to research and teaching is of the highest order. He painstakingly examines all aspects of information relating to problems and then is able to sift out the meaningful aspects and present them in an easily understood manner to students and colleagues Mike. For example, he was among the first in the world to grasp the significance of generalized or field resistance to late blight in potatoes compared to specific or hypersensitive types of resistance. This important concept is now commonly used in disease resistance research of many other crops. Also his original concepts regarding late blight epidemiology, as affected by the aggressiveness of specialized races of late blight, are now an accepted part of potato disease literature.

Another outstanding feature of this man’s career is his dedication to training students. It is of significance to note that eight of his students, who obtained advanced degrees in the last 12 years, are either directly, or indirectly, now engaged in potato research or extension activities — four of these former students are present tonight and I am very proud to say that I anl one of them. I mentioned earlier that this man’s award is of great singular importance. In a time when the world of science seems obsessed with the spectacular and the measure of a man’s scientific success is often equated solely with mere numbers of publications, The Potato Association of America is honoring one of its own whose outstanding contributions are: dedication to teaching students; being an original scientific thinker; an active contributor to potato disease research; and an intelligent critic of
his scientific discipline. The science of potato culture will long benefit from the efforts of this man. Mr. President, I would like to present Dr. Carl J. Eide of the University of Minnesota for Honorary Life Membership in The Potato Association of America. 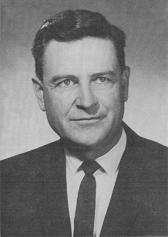 In Dr. R. W. Hougas, we are giving well deserved recognition to a man who has served The Potato Association of America and the potato industry with distinction. He held several offices and served on many committees before and after being President in 1957.

Bob is a Wisconsin product. After graduating from Iron River High School, he took both his Bachelor and Doctorate degrees at the University. In 1949, he was appointed to the staff and immediately devoted his entire attention to potato breeding and genetics. Within a short period he made a fundamental contribution to the genetics and breeding of poatoes, the development of haploids in the cultivated potato, Solanum tuberosum. This breakthrough now makes it possible to rapidly exploit a wide range of Solanum germ plasln. Actually, several potato breeding programs throughout the world have adopted the techniques developed by Dr. Hougas. His research also stimulated interest in establishing centers for the maintenance and preservation of Solanum germ plasm. Much of this work follows his leadership in developing the well known Regional Potato Introduction and Preservation Project located at Sturgeon Bay, Wisconsin, During this period, be also found time to advise many graduate students and postdoctorate fellows from various parts of the world. Well over 40 scientific publications also attest to his productivity. Both the Rockefeller Foundation and the European Potato Association have used his counsel and talents in developing research centers.

He is a member of the Genetics Society of America, American Genetics Association, Society for Econonfic Botany, European Potato Association, Sigma Xi, and, of course, The Potato Association of America. Sometimes a man gains greater recognition away from home, but not in this case. This past year Dr. Hougas was appointed Associate Dean and Director of the College of Agriculture after serving only 4 years as Assistant Director. He now advises and directs the vast program of research in the College and serves on several committees in the University. Dr. Hougas served his country during World War II from 1942 to 1945 in Naval Communications and was honorably discharged with the rank of Lieutenant, Senior Grade. His wife, Janet, and he were married in 1943. Since boyhood, Bob has enjoyed both fishing and hunting equally as nmcb as the real delight he now takes in, the documentation of his accomplishments as a true sportsman.

It is a distinct pleasure for me to present to the membership of The Potato Association of America Dr. Robert W. Hougas as an Honorary Life Member. 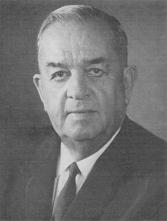 The addition of a man to our Honorary Life Membership who has passed away is unique in the rolls of The Potato Association of America. Harry E. Umphrey, of Washburn, Maine, had been considered and approved before his passing in early January of this year. Even though it seems a bit strange, it still is very fitting and proper that we add the name of Harry Umphrey to the honorary rolls of The Potato Association of America.

As we review his activities of a lifetime, we are very much impressed by the tremendous contributions that he has made. Thus, it is not a time for sadness at his passing but rather a cause for rejoicing that such a person lived amongst us and made such an impact on the lives of all who knew him in so many areas of business and social life. There is neither time nor space to list his many contributions, but we can review some of the most important.

I like to think of him particularly, as he was so well described by the award of the New England Council a few years ago, when they gave him the title of Agricultural Adventurer. This he was in its full depth of meaning.

Harry Umphrey was a leading producer starting from the time he carried mail in a rural route to supplement his farm income to the production last year of about two thousand acres of potatoes. Harry soon grasped the importance of marketing and hence, started a sales organization in the early 1920’s to xnarket his and his neighbors’ crops. This led to his being selected as General Sales Manager for the first large-scale cooperative sales organization in 1923, the Maine Potato Exchange. When that organization dissolved, Harry and his associates established the Maine sales organization for the American Fruit Growers, Inc., which operated from 1925 until about 1940. This was followed by the incorporation of his own sales organization, the Aroostook Potato Growers, which is still active in the marketing of potatoes. True to the descriptive term, Agricultural Adventurer, Harry Umphrey saw that the processing of potatoes opened up great possibilities for the future in merchandising of the Maine potato crop, and in response to the demand of the War Food Administration, a processing plant for potatoes was established in 1941. At the close of the war Harry’s associates decided to discontinue so he established the “Tater-State Potato Products Company” which has been one of the leading freezing operations in Maine.

The contributions of Harry Umphrey to agriculture were many and varied. He served for two years as President of the Aroostook County Extension Association; as one of the first chairmen of the National Potato Research and Marketing Advisory Committee, he made a major contribution in the encouragement of market research; he served for several years was a member of the Agricultural Committee of the U. S. Chamber of Commerce; he was Secretary of the New England Council for a period of years and was a member of its Agriculture Committee.

Harry Umphrey was active in banking circles, a member of the Board of Federal Reserve Bank of Boston, a member of the Board and Executive Committee of the Bangor and Aroostook Railroad, St. Croix Paper Company, and McCormack and Company of Baltimore. Harry was a great family man, loyal to his friends, helpful to those in distress, always ready to encourage young men and women by financial aid and advice, a builder in his community and State, an Agricultural Adventurer in the truest sense. It is an honor to the Potato Association of America that Harry E. Umphrey is included on its membership rolls.