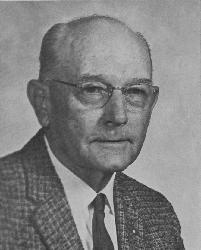 Miles Brown was born in Cedar, Wisconsin in 1900 and spent his early years near Marshfield, Wisconsin. He taught school in Wisconsin before moving to Michigan in 1926. The rest of his life has been spent in Elmira. Michigan, one of the important seed potato producing areas of the state. Here he started to work with potatoes on a grower’s farm.

Miles is the most respected potato inspector of the Michigan Potato Certification program. His intimate knowledge of potatoes and their disorders is based on 23 years of field and storage inspections. During this time he has endeared himself to those associated with potato production. Miles is friendly, mild mannered and soft spoken. When he speaks about potatoes he commands the respect and admiration of all.

Mr. Miles Brown is most worthy of the honor for which he has been elected. It is with genuine pleasure that I present Miles Brown as an Honorary Life Member of The Potato Association of America. 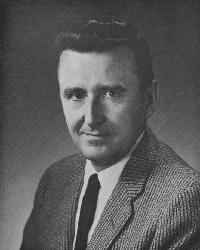 Paul J. Eastman was born in Vermont, but moved to Maine at an early age. He entered the University of Maine in 1940. His education was interrupted by World War II during which he served in the Air Force as a navigator. After serving three years, he re-entered the University and received his B.S. degree in 1946, and his M.S. degree in 1948. He was an outstanding student, and a member of Alpha Zeta honorary fraternity.

Following graduation, he worked a short time for the Maine Agri cultural Experiment Station. In this capacity he did some of the original work on chemical vine killing of potatoes. In the fall of 1948, Mr. Eastman was employed by the Maine Department of Agriculture where he has been ever since. At first he was assistant chief of the Division of Plant Industry, and for the past several years he has been chief of that division. He is also serving as the Deputy Commissioner of Agriculture.

During the past twenty years Mr. Eastman has been responsible for many programs in the Maine Department of Agriculture, but his greatest responsibility has been in seed potato certification, and seed development. Under his leadership, several innovations in seed improvement work have been initiated. The Maine potato seed board farm, known as Porter Farm has been developed and successfully produces over 100 acres of top quality seed each year. Seed from this farm is fed into the Maine potato industry through foundation seed growers. The fact that demands for seed each year are three times greater than the supply is proof of the program’s success.

Largely through Paul’s efforts a seedling development program was started, and this year some 80 varieties and seedlings are being produced under careful supervision and the best known seed producing practices. This program is designed to increase small lots of seedlings or new varieties so that a supply of high quality seed is available for varietal testing and for commercial increase. Through Paul’s efforts funds were made available this past year to hire a person in Maine to do potato breeding and to assist in evaluating new seedlings and varieties.

On a national level, Mr. Eastman is recognized as a leader in potato certification work. He has served on many committees and on several occasions has been asked to testify at various legislative hearings in Washington in relation to seed certification. 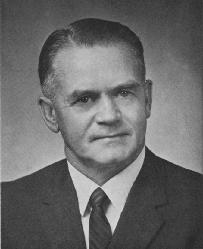 Donald C. Merriam has spent most of his life in the heart of Maine’s potato country, Presque Isle, Maine, where he was born on August 16, 1912. He completed high school at the height of the depression and spent the next few years as a farm laborer and potato warehouse worker.

In February of 1935 Don began his career at the Maine Agricultural Experiment Station working first with the late Wesley F. Porter whom he credits as his early teacher in potato disease diagnosis. He sharpened his eye in seed certification work, seed testing in Florida and foundation seed plot work, all of which contributed to the development of a keen interest in potato disease research. The late Dr. Reiner Bonde recognized his potential and convinced him to spend full time on research. As Dr. Bonde’s assistant Don found time to work on some of his own research ideas and was able to make many independent contributions. One of the most notable of these was the discovery that the spindle tuber virus could be transmitted mechanically by “top-switching.” This work unlocked the then perplexing puzzle of how PSTV was transmitted so readily in the field. It also provided the key to finding diagnostic hosts for this virus.

Other potato pathologists who gratefully acknowledge the value of Don’s talents are Drs. E. S. Schultz and Donald Folsom. These men are well-known in potato research, particularly in the area of virus study, Don’s specialty.

In addition to authoring or co-authoring over 30 scientific publications, Don is known to many as a willing cooperator and provider of valuable research material. Maine growers also know him well as a ready and reliable source of help and advice. His practical knowledge of potato diseases and his uncanny ability to recognize their symptoms have meant the measure of success to many seeds men.

It is indeed a great pleasure to present Donald C. Merriam as an Honorary Life Member of The Potato Association of America. 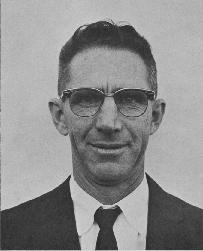 Mr. President, honored guests, members and friends of The Potato Association of America: It is an honor and pleasure for me to present Professor Walter C. Sparks for Honorary Life Membership in the P.A.A.

“Walt,” as he is known to all of his friends and associates, was born in New Castle, Colorado, August 22, 1918. He attended Western State College for one year, then transferred to Colorado State University where he obtained his BS and MS in Horticulture. He did graduate work on his Ph.D. at the University of Minnesota and Washington State University. After serving as Instructor, Assistant and Associate Professor of Horticulture at Colorado State University, he left Colorado in 1947 to become Associate Horticulturist with the University of Idaho,, where he has served for the last 22 years in several capacities including three appointments as acting Superintendent of the Idaho, Aberdeen Branch Experiment Station.

“Walt” is a member of many professional and honorary societies including The Potato Association of America which he has served as Director and President. Locally has been active with the Boy Scouts of America, the Chamber of Commerce, and Rotary International. During this long period of professional activity, he found time to woo and win his vivacious wife, the former Fern Gardner.

“Walt” has received numerous honors in connection with his research on potatoes. These include The Eldred L. Jerme Research Fellowship Award presented in 1957; Appointment as Advisor on Potato Problems to the Chilian Government and the Australian Government; The Federal Land Bank’s 50th Anniversary Medal authorized by the Congress and the President of the United States in 1967; and a Certificate of Highest Merit for distinguished and unusual service to the Potato Industry of Idaho from the Governor of Idaho. Walt’s research findings have resulted in saving untold thousands of dollars for the potato growers of Idaho through their use of better storage practices as well as recommended production and disease control methods.

Mr. President, it is with pleasure that I present Walter C. Sparks as an Honorary Life Member of The Potato Association of America.