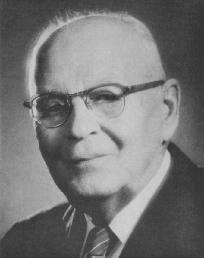 Mr. President, honored guests, ladies and gentlemen. It is with pleasure that I present Frank L. Clark to The Potato Association of America for Honorary Life Membership.

Mr. Clark. born 84 years ago on a potato farm in Fort Fairfield, Aroostook County, Maine, has been a potato producer all his life. He was one of the first producers of certified seed in Maine. He decided to produce potatoes closer to the market and moved to Connecticut in 1934. Mr. Clark soon learned of the difficulties in securing good seed potatoes, and decided to produce seed potatoes under high altitude and isolated conditions in Richford and Avoca, New York.

Potato seed production has been his major interest. With isolation, long-time rotation on his farms, and continually securing good disease-free seedstocks, he earned the reputation for producing superior high quality seed potatoes on his seed farms in New York State. In recent years he has emphasized production of potatoes for tablestock and for chipping.

As a hard working member and supporter of the National Potato Council, he earned recognition by being honored with a plaque for his active role in seeking solutions to production and marketing problems. He has been active for many years in the Empire State Potato Club and its program of growing and marketing potatoes. 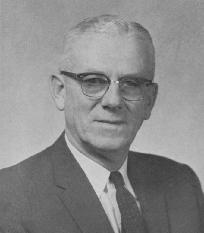 President Munro, ladies and gentlemen: It is indeed an honor and my pleasure to present to you Professor Elmer Pifer for the award of Honorary Life Member in The Potato Association of America.

Elmer has been working on potato problems in Pennsylvania since 1947, when he joined the Penn State staff as extension agronomist. He has attended many PAA meetings, and has often presented the results of his fertilization studies to the membership. His early interests in soil conservation and teaching have been reflected in his contributions to improved production management practices for potatoes in Pennsylvania. Extensive use of soil testing procedures by Pennsylvania growers reflects Elmer’s efforts in this direction. He retired in June 1969, having served on the Penn State staff for 22 years.

Elmer was chairman of the Extension Programs Committee of PAA, and has been a steady participant and supporter of the Association. His talent in the conduct of interpersonal relations was recognized when he was a member of the Pennsylvania Potato Industry Goodwill People-to-People Mission to Western and Eastern Europe. He is an active member of the American Society of Agronomy and other technical and honorary professional groups in addition to the Potato Association of America. He is the author of numerous publications and articles on potato production in Pennsylvania.

Elmer’s wife, Nancy, is with him tonight, sharing this moment of recognition as she has shared so much in the years leading to it. The Pifer’s have a son James, a daughter Patricia Jean, both Penn State graduates, and four grandchildren. Ehner — we congratulate you, and thank you for your lifetime career of service to your family, friends, colleagues, and to our industry. We hope you will continue to be interested in potatoes and in The Potato Association of America, and we look forward to many more meetings with you in attendance.

Mr. President, I am pleased to present Mr. Elmer Pifer for Honorary Life Membership in the Potato Association of America.

It is indeed a pleasure for me to introduce my friend of long standing and to present him for Honorary Life Membership in The Potato Association of America. Dr. Orrin C. Turnquist, professor and extension horticulturist at the University of Minnesota, is widely known among the state’s growers of potatoes and other vegetables. He has served as secretary of the Minnesota Vegetable Growers’ Association since its organization in 1949. Dr. Turnquist has been a director, vice president and president of The Potato Association of America and is a member of the European Association for Potato Research. In 1966 he was granted leave from the University and was awarded a Ford Foundation Travel grant to study potato breeding in Europe.

He became an extension specialist at the University in October, 1949, and his work since then has been largely with commercial potato and vegetable producers as well as with other farmers and home gardeners. Orrin has been engaged also in teaching courses in general horticulture, vegetable crops and horticultural crop judging. He has coached several collegiate vegetable judging teams in national contests. He has been secretary of the Ninth District Horticultural Society and has worked with garden clubs in Minnesota for many years. In 1961 he received the distinguished service award of the Minnesota Horticultural Society. He has also been awarded the honorary FFA State Farmers’ degree. Orrin, who was born in Minneapolis, Minnesota April 29, 1913, holds B.S., M.S., and Ph.D. degrees from the University of Minnesota. His first job was on the Minnesota staff as horticulturist at the Northwest School of Agriculture and Experiment Station, Crookston. He moved from there to potato variety testing work at the University of Minnesota, St. Paul campus. Before becoming an extension specialist, he served the U.S. Department of Agriculture as regional coordinator for potato breeding work in the six states of the North Central region, with headquarters at the Institute of Agriculture. He is presently in charge of the terminal phase of the Potato Breeding Project of the University.

Orrin is well known throughout the United States and Canada as a judge of potato and vegetable exhibits. He is the author of numerous research and extension publications on potatoes and vegetables. January 18, 1969 was a very special day for him. On the morning radio program of station WCCO he received a citation for “Good Neighbor of the Northwest” for work in potato promotion and development. At a luncheon of the Minnesota Vegetable and Potato Growers’ Annual Meeting he was presented a plaque for being one of the founders and for twenty years of service to the Association and industry. As a final tribute for his respected and dedicated service in Minnesota, he was presented with an Honorary Life Membership in their Association. Orrin is held in high esteem by potato and vegetable growers in his state. During the 12 years I spent in the Red River Valley I noted his excellent acceptance by the potato growers of Minnesota and North Dakota. I’ll never forget the efficient manner in which he conducted his potato variety field days. 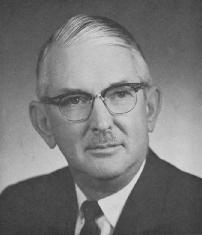 Dr. George W. Woodbury was born in St. Johns, Michigan. He received a B.S. degree in 1927 and an M.S. in 1931 from Michigan State University. He earned his Ph.D. in Vegetable Crops from Cornell University in 1943.

Dr. Woodbury has spent more than 30 years serving the students and the Idaho Potato Industry. He was responsible for planning and directing much of Idaho’s potato research program. During his tenure, Idaho rose to Number One among the states in both total acreage and production. For the past 20 years he has served as chairman of Idaho’s Potato Variety Selection Committee, an industry and professional group to aid and counsel the directors of the Aberdeen potato breeding program. During his years of academic achievement Dr. Woodbury was a member of the American Society for Horticultural Science, the Potato Association of America, Alpha Zeta, Sigma Xi and Phi Sigma.

Dr. Woodbury has maintained more than a passing interest in his students. A number of them have developed into potato experts and have affiliated themselves with various phases of the potato industry. He has taught courses in ornamental horticulture, plant breeding, potato culture, vegetable seed production, vegetable production, Research in vegetable seed production, canning crop production and post-harvest physiology of potatoes. From 1954-56 he was chief advisor to the Cooperative AID project in Ecuador and in 1961 was a Fulbright lecturer at the University of the Andes, Bogota, Colombia.

For his efforts and accomplishments Dr. Woodbury received a citation from the governor of Idaho. Though retired from active University life, Dr. Woodbury continues to live at Moscow, Idaho and maintain his interest in the Idaho potato industry and in his former students. Dr. and Mrs. Woodbury have been married since 1928 and have one son and one daughter. It is my distinct pleasure to present Dr. George W. Woodbury for Honorary Life Membership in the Potato Association of America.