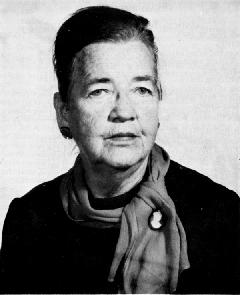 It is our pleasure to present to you the name and distinguished record of Elizabeth F. Murphy as an Honorary Life Member of The Potato Association of America.

Miss Murphy graduated from the University of Maine in 1930 with a Bachelor of Arts degree in Zoology. In 1934 she received her Master’s degree in Physiology from the same University. Further graduate study at the University of Pittsburg as a special student in Biochemistry during 1937 was followed by additional training at Columbia University in Chemistry of Food and Nutrition.

Miss Murphy was appointed to the professional staff of the Division of Biology, University of Maine in July 1930. In 1959 she was promoted to Associate Professor and in 1967 to Professor of Horticulture. The following year she was given the additional title of Professor of Food Science.

During her distinguished professional career at the University of Maine, Miss Murphy has been senior author of 28 publications and coauthor of an additional 23.

A close look at the publication addendum show 19 publications directly associated with potato quality including research on nutritive value, flavor, and mealiness. Miss Murphy has a world-wide reputation for her many studies in methodology for sensory evaluation of potato quality factors. She has also been a close confidant to her co-workers in other phases of potato quality.

Even though Professor Murphy retired from the University of Maine as of July 1974, her publication record will certainly continue. She has much research data pertaining to potato chips and french fries, mealiness, and potato storage effects on potato quality yet to publish. In addition to potato sensory evaluation data, she will also publish papers on other foods including fruits, poultry, and many good sea food items from Maine coastal waters.

Miss Murphy holds membership in: The Potato Association of America, the American Society of Horticultural Science, The Society of Sigma Xi, and the Institute of Food Technologists where she served as a member of the Sensory Evaluation Committee for 3 years. In addition, Elizabeth has been a member of the American Association of University Professors, and served as Secretary of the Maine Chapter for 2 years. As a long time member of Phi Beta Kappa, she served as Vice-President from 1971-73 and President 1973-74. Miss Murphy has also served on numerous local and University Committees including : University Music Committee — 1969-71; Honors Banquet Committee- 1962-73; College Advisory Committee (Chairlnan and Secretary); Graduate Faculty — 1966 to date; Plant and Soil Sciences Graduate Committee (Chairman – 1967-69); Council of Colleges — 1972-73; Honors Course Faculty — 1971-72; Board Member of Family and Child Services for City of Bangor — 1966-68; Downcast Section of Institute of Food Technologists; Secretary-Treasurer- 1967-1972; Executive Committee — 1973 to date.

Miss Elizabeth F. Murphy and her record as a potato research worker in the very technical fields of nutrition, quality, and sensory evaluation technology certainly deserve the respect of her co-workers and the potato and food industries which she has so diligently served.

It is indeed a privilege and honor to present Elizabeth F. Murphy to The Potato Association of America for Honorary Life Membership. 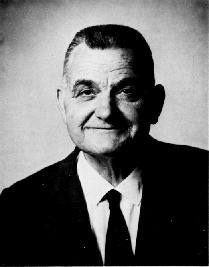 Frank E. Garrett, the gentleman who I am presenting as an Honorary Life Member, is retiring during the coming year and has contributed significantly to the potato industry for some 35 years. His contributions have not only served the industry in Alabama, but also the industries in several northern States through cooperation with various research and seed certification programs. His cooperation with the States of Michigan, Wisconsin, North Dakota, Minnesota and Nebraska is particularly noteworthy.

During his association with the State Department of Agriculture of Alabama, and Auburn University, he has been the “Mr. Potato” of Baldwin County serving the potato growers and marketing people in southern Alabama. His demonstration trials involving insect and disease control and soil fertility have been the basis for recommendations to growers and the development of production practices presently being utilized in that area.

His services to research programs of various States have involved studies and the development of concepts used in the physiological conditioning of seed potatoes for use in the Gulf Coast area. Such studies have therefore also involved cooperation with agricultural agents of various railroads.

Related studies have provided information relative to plant and tuber development for specific varieties under the short day conditions of the Gulf Coast area.

Last but not least, seed certification programs and agencies in Michigan, Wisconsin, North and South Dakota, Minnesota and Nebraska have relied on and benefitted from his cooperation in providing supervision and facilities for winter testing of commercial seed lots. Consequently the seed industries of northern States can attribute much of their success in maintaining disease free seed lots to his efforts and cooperation.

As evidenced by these activities Frank has served in an Extension and Research capacity as well as a general advisor or “Mr. Potato” in the potato industry. Many publications have resulted from his cooperation with research people. This presentation is made on the basis of the significance of his service to many producing areas, agencies and activities in the national potato industry. 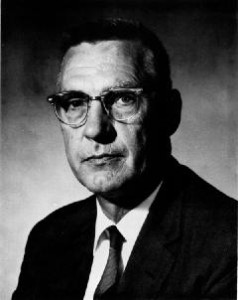 Mr. President, honored guests, ladies and gentlemen: It is an honor and our pleasure to present Dr. Robert E. Nylund for the award of Honorary Life Membership in The Potato Association of America.

“Bob” was born in Ely, Minnesota on January 22, 1916. He married Catherine E. Wina in 1940 and they have two sons, James and Thomas. He received his B.S. (with distinction) in 1938, M.S. in 1942, and Ph.D. in 1945 in Horticulture at the’ University of Minnesota. From 1939-1941, he was an instructor and station Horticulturist at the Northwest School and Experiment Station, Crookston, Minnesota. In 1941, he became a staff member of Horticultural Sciences at the University of Minnesota, rising to the rank of full Professor in 1959.

He has had an active role in both research and teaching. He has assisted local industries and farmers groups in all areas of horticulture in solving their immediate practical problems. Evidence for the extensive nature of his efforts can be seen in his more than 250 publications, many of which are on potatoes and cover almost every area of the industry, including cultural practices, handling, storing, marketing and processing.

Bob’s skill has also been widely recognized abroad and has led to requests for his services in many nations of the world. He received a Fulbright lectureship at the University of Helsinki, Finland, 1959-1960. In recognition of his valuable services to the University they awarded him the medal of Merit, an honor reserved for the very few. He returned to the University of Helsinki in 1972 on a joint Fulbright lectureship. In 1965 he received a travel grant from the Office of International Programs to study horticulture and horticultural research in India, Thailand, the Philippines, Korea, Japan and Hawaii.

Besides his own significant accomplishments Bob can, be assured that he will continual contributing to horticultural and potato research, through the efforts of his many graduate students, including 7 M.S.’s and 18 Ph.D.’s. He has always shown the greatest concern for his students and has sacrificed much of his own research effort to see that their abilities were fully developed. We know that these students in particular and the potato industry both here and abroad wish to join in tribute, to Dr. Nylund by presenting him for Honorary Life Membership in the Potato Association of America.