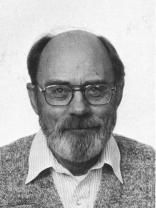 Joe has spent his entire professional career working as a potato breeder for the USDAARS at the University of Idaho, Aberdeen Research and Extension Center. His work has influenced variety development efforts throughout the United States and Canada. He has participated in the release of twelve potato varieties and contributed breeding stock that led to the development of at least nine additional varieties.

Joe has worked for over twenty-five years to develop the largest and possibly the best russet type potato breeding population in the world. One of his greatest attributes is a willingness to freely share both his abundant breeding stocks and his less than abundant time. Joe consistently shares material with most breeding programs throughout North America and his breeding stocks are the basis for most of the variety development efforts in the Western U.S. He also gives freely of his time to teach interested individuals the art and science of potato breeding. Joe has published a number of papers including 18 in APJ and has received the National Potato Council–Researcher of the Year Award in 1989 and the USDA Certificate of Merit in 1990.

Dr. Pavek has been an avid supporter of The Potato Association of America since 1967. He has served as a Director, Vice-President, President-elect and in 1987-88 as President. Additionally, he has served on many committees of the PAA and worked on the editorial beard for APJ from 1973-89.

Joe and Sylvia, his wife of thirty-four years, have seven children and three grand-children. Joe’s love for plant breeding is reflected in his hobbies which include hobby breeding of roses, carnations, and irises. He also loves to backpack and fish.

His tireless and generous efforts as a breeder will continue to benefit the potato industry for many years to come. It is with pleasure that I present Dr. Joseph J. Pavek for Honorary Life Membership in The Potato Association of America. 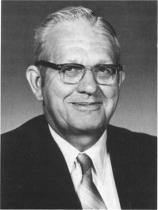 Professor Emeritus in the Department of Horticulture, The Ohio State University, was born in southwestern Ohio on August 11, 1922. His parents had a vegetable farm where a variety of vegetables including potatoes were grown for the Cincinnati wholesale market.

Gene, as he is known by his many friends in the industry and the academic community, became interested in potatoes when he had a 4-H Club project involving the production and marketing of potatoes. He made enough money from the 4-H project to-pay most of his expenses for the first year at Ohio State where he enrolled in the College of Agriculture in 1940 to major in the Department of Horticulture.

Gene graduated from Ohio State in 1946 with a major in horticulture, then spent another year in graduate school. Following several years in the agricultural chemical industry, he joined the faculty in the Department of Horticulture in 1950 as Extension Specialist in vegetable crops with responsibilities for the educational program with potatoes. He joined the faculty as an instructor and became a Professor in 1959. He retired in 1984 with a rank of Professor Emeritus.

During his career at Ohio State, he worked closely with the late Dr. F.S. Howlett on some of the early work on plant analysis as a management tool for potato growers. This involved field demonstrations as well as laboratory work. From his early background as a farmer, he recognized the importance of cultivar selection. He cooperated with the late Floyd Lower, a PAA member, in the over-the-state potato variety trials.

In addition to being a member of The Potato Association of America for nearly forty years, he is a charter member of the European Association for Potato Research, a member of the Ohio Vegetable and Potato Growers Association and the American Society for Horticultural Science. During his career, he has received numerous recognitions including the Carl S. Bittner Extension Award from the American Society for Horticultural Science, the state distinguished service award from the Ohio chapter of Gamma Sigma Delta. In 1974, the Ohio Food Processors Association presented their highest award, the H.D. Brown Award. In 1988, he was inducted into the Ohio Agricultural Hall of Fame.

For his many years of service to the potato industry, I am happy to present E.C. Wittmeyer for Honorary Life Membership in The Potato Association of America. 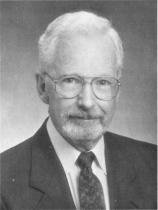 It should surprise no one that Don Young chose a career in agriculture. He was born in Fredericton on October 21, 1929, and grew up on the Experimental Farm that was later to become the Agriculture Canada Research Station. Don’s father, Lou C. Young, was the first head of the Potato Breeding Section, and was also recognized with an Honorary Life Membership in The Potato Association of America.

Don’s education took him through the Nova Scotia Agricultural College, Macdonald College, and the University of Wisconsin. Much of this time Don had summer jobs at the Experimental Farm in Fredericton, and when he completed his training in 1957 he accepted a permanent position in the Potato Breeding Program. Ten years later Dr. Young became Program Leader.

Dr. Young led the program through a series of major changes, building a multidisciplinary team with the addition of a quantitative geneticist, a cytogeneticist and a pathologist. As the program evolved, the Alma Substation was no longer suitable and in 1975 the move was made to new facilities at Benton Ridge.

Among the program innovations associated Dr. Young was the recognition in the early 1960s of the importance of internal texture in french fry quality. The resulting evaluation criteria assured that the potential of Shepody was recognized. Released in 1980 this variety is closing in on second place in Canada, and is competing for fifth place in the United States; in the french fry industry it is the only major competitor for Russet Burbank. Part of the success of Shepody can be attributed to the development of a management profile for growers which incorporated breeding program information, data from the McCain Research Farm, and input from growers during the early years of the production of the variety.

Under Dr. Young’s leadership one of the first computer-based information retrieval systems to be used in a breeding program was developed in the late 1960s. In 1970 Dr. Young was the first editor of the Atlantic Canada Potato Production Guide which was recognized as one of the best potato management publications on the continent. Inthe mid 1970s Dr. Young had a major input into creating what is now the NE-107 regional project in the northeast United States. Under Dr. Young’s leadership the breeding program also became involved in off-shore markets. The whitefleshed, purple-skinned variety Caribe was released for the Caribbean market, and two yellow-fleshed varieties, Donna and Brador, were released on an exclusive basis for the development of off-shore seed export markets. This market involvement led to a close association between Dr. Young and Potatoes Canada, and especially its Potato Technology Course which he enthusiastically supported.

Dr. Young’s work has also extended beyond North America. In 1978 he managed a joint International Potato Centre–Fredericton Potato Breeding Program research project on predicting the response of selections in environments where they had not been tested which involved trials in 12 countries. At the request of the Canadian International Development Agency in 1983-84 Dr. Young visited Bangladesh to develop the potato section of a four crop, $50m, Crop Diversification Program.

Dr. Young retired from Agriculture Canada in 1986 but his career merely changed direction. From 1986-90 he worked for the New Brunswick Department of Agriculture as Technical Director of the Keshan Potato Research Institute Project, in the Heilongjiang province of the People’s Republic of China. This Canadian International Development Agency project was designed to increase the research capabilities of the Institute. Since 1986 Dr. Young has also worked extensively in Canada and around the world for the McCain organization.

During his many years in The Potato Association of America, Dr. Young has served the Association in many ways. In 1977 when the Association met in Fredericton Dr. Young was chairman of the local arrangements committee. In 1986/87 he served a term as President.

For his many contributions to the potato I am honored and pleased to present Dr. Donald A. Young for Honorary Life Membership in The Potato Association of America.