George Tai was born in the city of Yangchow (where Yangtze River and Grand Canal meet) in Jiangsu Province, China. He soon moved to Taiwan where he completed his first two degrees and military service. He then immigrated to Canada in 1965 to complete his Ph.D. studying wheat genetics at the University of Saskatchewan. Following that, in 1968, Dr. Tai joined the potato breeding program at what is now the Potato Research Centre of Agriculture and Agri-Food Canada in Fredericton where he worked until his retirement in 2002.

Dr. George Tai is known around the world for his significant contributions in quantitative genetics, breeding methodology, improvement of processing quality, development of evaluation instruments, and collaborations with colleagues in many related disciplines. Dr. Tai’s theoretical work has included a new approach to combining ability analysis for asexual crops, a series of seminal papers on the biometrical genetics of tetrasomic inheritance based on the cytogenetic behaviour of 2n (FDR and SDR) gamete formation, the initiation of a new field of research on the precision of estimates of the genetic parameters determining response to selection, index selection, and various mathematical models for the study of genotype x environment interactions. This research focused on resolving some issues to improve the efficiency of potato breeding programs and has included, for example, extensive analysis of trial data from the NE1014 project, and assessment of pest and disease resistance data for NRSP-6 accessions. Dr. Tai’s theoretical work in quantitative genetics has had application far beyond potatoes. He has authored about 100 research publications.

Dr. Tai’s pursuit of improved processing quality led him to look at means to quantify quality traits and to successful collaborations with those with skills to devise instruments to do this. Thus he contributed to the design of the GRAV-O-TATER for the digital recording of specific gravity, and a sugarmeter to determine levels of reducing sugars. He also used imaging technology to map internal distributions of dry matter and sugar, and to index tuber shape and size. Dr. Tai is generous with his knowledge and is considered an excellent teacher with the ability to clearly explain the most complicated principles and statistical procedures to students and colleagues alike. His expertise in genetics and statistics has been recognized in associations with the University of New Brunswick, the University of Guelph and the Nova Scotia Agricultural College. He has co-supervised a number of graduate students.

Dr. Tai has been a member of the editorial board of the American Journal of Potato Research and since 1999 has been statistical consultant. He has also been an editor for Euphytica and Annals of Applied Biology. He has refereed as many as 30 manuscripts a year for Crop Science, Canadian Journal of Plant Science, Genome, Theoretical and Applied Genetics, and other journals.

Dr. Tai’s expertise has also been sought by the International Potato Centre and he has participated in several planning conferences there and was an invited member of the Centre’s Internal Review committee in 1984. He has delivered invited presentations on potato breeding and research in Germany, Hungary and China, and in symposia to honor the retirement and the 80th birthday of Professor Stanley J. Peloquin. He has been invited to author and co-author eight book chapters.

Most of Dr. Tai’s international work has been in the People’s Republic of China. His first invitation came in 1986 from the Chinese Agriculture Ministry to visit research institutes and to lecture in Nanjing and Beijing. He was an advisor and consultant on potato breeding and production to a Canadian International Development Agency project in China in 1990 and 1991, and served as liaison person and interpreter. He was advisor and consultant to a United Nations Development Project on “Strengthening the capacity of potato breeding and propagation” in China in 1995 and 1996. The following year he was invited by the government of China to lecture at the Gansu Agricultural University. He was in China again in 2001 and 2004 visiting research laboratories, field plots and industry, providing advice and presenting seminars to faculty and students at several universities. Dr. Tai also contributed to a Canadian International Development Agency (CIDA) project in Brazil in 1989.

In addition to his many professional accomplishments, Dr. Tai has contributed a great deal to his community. He was a founding member of the Fredericton Chinese Cultural Society, has been its vice president and a very active participant in many of its programs, including the language school and music and craft programs. He has also been active in the local Multicultural Society. In keeping with his considerable ability to explain complex principles so that they are easy to understand, and the enjoyment he always finds in his work, Dr. Tai has also been active in Science East, a Fredericton community-based organization that promotes hands-on science learning and education to young and old in New Brunswick.

Dr. Tai retired from Agriculture and Agri-Food Canada in 2002 but has continued to work particularly with editorial and consulting activities, and remains active in the local community. Dr. Tai lives in Fredericton with his wife Cecilia. They have three children. 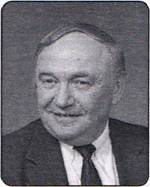 Larry was the extension weed management specialist in horticultural crops in the Department of Horticulture at the University of Wisconsin-Madison. He served in this capacity from 1969 until 2001 and served as Department Chair for the last 10 years of his career. Larry focused his research and extension program on weed management issues such as pesticide contamination of the groundwater, herbicide physiology, crop-weed competition, and specifically the development of integrated weed management systems in specialty crops. The focus of his research and extension program included a broad array of horticulture crops including Christmas trees, cranberries, mint, onion, carrot, processing vegetables, ornamental crops and of course potatoes. Larry was a national leader in the development of weed management systems for potato and other vegetable crops.

Larry was coordinator of the IR-4 program at the University of Wisconsin as well as serving as chair of the Integrated Pest Management Committee. In addition, he was founder and co-coordinator of the Nutrient and Pest Management Committee, an extension program dedicated to improved water quality and profitable crop and dairy production. Larry advised over 20 graduate students in horticulture and weed science while at the University of Wisconsin-Madison. Larry authored numerous research and extension articles while at WI.

Larry is most well known for his dedication and service to the potato and vegetable industry of Wisconsin. He served or advised numerous committees with the Wisconsin Potato and Vegetable Growers Association, the Wisconsin Mint Board, the Wisconsin Muck Growers’ Association, the Midwest Food Processors Association, and other industry groups. He was always willing to visit with growers and industry members and was eternally willing to answer questions, walk fields, or try to work through management issues. Larry was recognized as the “Research of the Year” by the WPVGA in 1992 and received and industry recognition award in 2003.