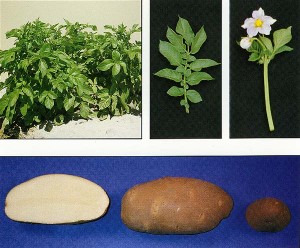 ORIGIN: Goldrush was first selected in 1981 from a cross between a North Dakota advanced selection ND450-3Russ x Lemhi Russet. The cultivars Pioneer and Norgold Russet are in its ancestry. It was tested as ND1538-1Russ and was released by the North Dakota Agricultural Experiment Station on March 1, 1992.

CHARACTERISTICS: Goldrush is a medium maturing russet cultivar grown primarily for the fresh market. The plant is medium-large with an upright growth habit, with medium-sized, moderately pubescent leaves having an open silhouette. Stems are green with purple pigmentation at the base with moderate-sized, waved wings. Flowering is sparse with the flower color being off-white to light lavender. Flowers are large with orange anthers that shed abundant pollen. Russeted tubers are oblong-blocky to long and average approximately 6-10 tubers per plant. Eyes are very shallow and well distributed; under some conditions they may show a reddish blush. Tuber flesh is very white and tuber dormancy is medium in duration.

STRENGTHS & WEAKNESSES: Goldrush generally produces smooth tubers with few external and internal defects, although they can be variable in shape. Under non-irrigated conditions, U.S. No. 1 yields were comparable to Russet Norkotah, but substantially higher than that of Russet Burbank. Under irrigation, U.S. No. 1 yields of Goldrush are comparable to Russet Burbank. Under both irrigated and non-irrigated conditions, Goldrush has a very low incidence of hollow heart compared to Russet Norkotah or Russet Burbank. Its white flesh, texture and flavor make Goldrush particularly suitable for home and restaurant consumption. Tuber specific gravity is low to medium, similar to Russet Norkotah. Goldrush has been observed to have moderate resistance to Verticillium wilt, good resistance to scab, moderate resistance to blackspot and some resistance to silver scurf. It is considered susceptible to most common potato viruses and other potato diseases, such as early blight, late blight, soft rot and Fusarium dry rot. Goldrush is not well suited for processing into fries, although it can be used for such purposes with early harvest and limited storage. Under certain storage conditions, a reddish blush has been observed on the apical end of the tuber.