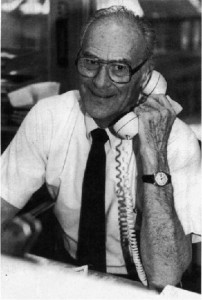 Larry Thibodeau, president of Maine Farmers Exchange of Presque Isle, Maine, has marketed 60 crops of Maine potatoes during his distinguished career. He has been an outstanding public servant serving on numerous industry boards, civic organizations and university committees. He has served the Potato Association of America as a member of three local host committees, attended and supported the Potato Utilization Conference held for many years in conjunction with the PAA annual meeting and has maintained active or sustaining membership in the organization.

Lawrence A. Thibodeau was born October 11, 1915 in Caribou, Maine of French-Acadian parents and graduated from Caribou High School in 1933 where he was very active in three sports. As a youth during the depression he worked as a messenger boy for the postal telegraph in Caribou. In 1935 he opened his own potato brokerage office in Caribou, becoming the youngest person in the country to hold a produce brokers license. Maine author Helen Hamlin in her book, PINE, POTATOES and PEOPLE, published in 1948, describes a movie date she had with Larry Thibodeau when he was 18 years old and was working as a potato broker. She indicates Larry would leave the movie theater intermittently to complete potato deals. He actually made a buy early in the show and sold those potatoes at a modest profit before the movie was over. Ms. Hamlin wasn’t too bothered by Larry’s distractions as she confided the movie wasn’t that good anyway, but her insight into Larry Thibodeau’s enthusiasm for potato marketing was quite telling since that energy has not waned to this day.

From 1937 to 1943 Larry Thibodeau was employed with Bishop and Babin, one of Maine’s largest potato brokerage firms, and during that service he spent nearly two years developing a potato marketing center in the Steuben County area of New York later to become known as “Little Maine.” In 1943 he joined Maine Potato Growers, a large grower service and marketing cooperative in Presque Isle, and rose quickly to the office of potato sales manager for the firm. Over the next 15 years he developed the cooperative into one of the largest potato marketing organizations in the United States. He helped develop the Blue Goose national cooperative produce brand, led the effort to establish a federal/state marketing order for Maine potatoes and was instrumental in establishing the forward selling of Maine potatoes on the New York Mercantile Exchange.

In 1958, Thibodeau left the cooperative to establish his own potato marketing firm, Maine Farmers Exchange. Over the years his firm has grown to include a potato farming operation in Fryeburg, Maine, a real estate brokerage business, an agricultural consulting business, and a commodities marketing firm with seats on the New York Mercantile Exchange. In 1988 he purchased full ownership of a produce brokerage firm in Dover, Delaware which allows his company to supply retail and wholesale customers on a year-long basis. His was one of the first firms to successfully market chipping potatoes from Maine and to develop international sales of Maine seed potatoes. Currently his firm markets a high percentage of Maine tablestock and seed potatoes as well as large portions of the Delaware, Virginia and North Carolina fresh crops.

As an active supporter of the potato industry, Larry Thibodeau has served on the board of directors of the Bangor and Aroostook Railroad, Aroostook Valley Railroad, Katahdin Trust Company Regional Bank, and Husson College in Bangor, Maine, and has served as a citizen advisor to three deans of the University of Maine College of Agriculture and Agricultural Experiment Station. He has been a long-term member of the United Fresh Fruit and Vegetable Association and is a past director and past chairman of the Potato Division. He has been an active member of the Produce Marketing Association. He has served as a member and chair of numerous committees of the former Maine Potato Council, Maine Potato Commission, the Presque Isle Chamber of Commerce, the Aroostook Medical Center and Rotary International.

Thibodeau has been honored with distinguished citizens awards by the University of Maine, the Boy Scouts of America, the Future Farmers of America and Aroostook County Farm Credit Service.

Thibodeau and his wife, Audrey, are the parents of four children, two sons, Lee and Donald, and two daughters, Ann Seitz and Bunny Andrews. They have nine grandchildren. Thibodeau is an active outdoorsman, enjoying upland game hunting and fly fishing. 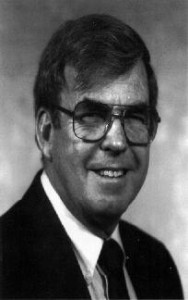 David Curwen was born at Ridgewood, New Jersey in 1935. While he did not grow up on a farm, it is likely that he became interested in plants due to observing the varied horticultural enterprises so characteristic of the state of New Jersey. After graduation from high school, Dave entered the University of Vermont receiving a B.S. degree in Horticulture in 1957. He continued his higher education at Pennsylvania State University receiving an M.S. degree in 1960 and a Ph.D. in Horticulture and Food Science in 1964.

While completing his Ph.D. degree Dave answered a call from Wisconsin where an opportunity in horticultural extension work was offered. In 1963 Dave began activities as an Assistant Professor and Area Extension Specialist in Vegetable Crops in Central Wisconsin’s rapidly expanding irrigated vegetable and potato growing area. From the time of his appointment in 1963 through his retirement in 1994, Dave’s office was located at the Hancock Agricultural Research Station near Stevens Point. This arrangement enabled him to serve the irrigated crop industry more effectively but necessitated much travel to and from the Madison campus to participate fully as a staff member in the Department of Horticulture. Through a combination research and extension appointment Dave developed and implemented a program of assistance to the commercial potato and vegetable industry. The result of his efforts has aided many small scale growers as well as the numerous large farms with solutions to their production and marketing problems.

During the later years of his career Dave directed his attention toward solving special environmental and public relations problems which were generated by the rapidly developing irrigated crop production in Wisconsin’s Central Sand area. It has been through his foresight and actions that there now is a better understanding of the interests of both growers and the general public society. This has improved relationships within the community and has resulted in a better understanding of the value of an economically sound agriculture and food processing industry. It is due to Dave’s efforts that there now is a more sustainable future for the irrigated vegetable growing industry in Central Wisconsin.

Specific programs that Dave has been responsible for include; more effective wind erosion control, improved irrigation management, protecting ground water quality and improved market opportunities for growers. There are several nationally recognized programs in which Dave was closely involved in developing. These include the Wisconsin Irrigation Scheduling Program (WISP) and the Integrated Pest Management Program (IPM). These programs are currently widely used throughout Wisconsin. Dave has been a most dedicated and diligent team worker throughout his 30-year career in vegetable and potato extension and research work. He has produced over 100 formal publications, over 70 extension publications, numerous computer programs and has presented countless topics at state, regional and national grower and industry meetings. In addition to his regular extension and research activities, Dave has made time to serve as an educational advisor and participate in organizational affairs. His dedicated service to the Wisconsin Potato and Vegetable Growers Association and the Midwest Food Processors Association is most noteworthy. He has also been an active member in the American Society of Horticultural Science throughout his career.

Of special significance to the nation’s potato industry has been his special service to the Potato Association of America. Dave served a leadership role in organizing and conducting the annual PAA meetings held in Wisconsin in 1976 and in 1993. He served as chairman of the PAA Extension Section for several years and as a member of the Editorial Board. Of most significance and known and appreciated by all PAA members has been his most diligent service as secretary of the Potato Association of America for the past 10 years. This has been a special “labor of love” for Dave as he has been driven by a keen desire to serve others and promote the welfare of the potato industry nation wide.

Dave retired from his extension and research position at the University of Wisconsin as a full Professor of Horticulture in 1994. He was awarded Emeritus status that same year. In his retirement Dave plans to spend more time along with his wife Barbara participating in the growth and development of their six children and numerous grandchildren. Dave is also planning more time to garden, golf and cross-country ski as well as his special hobby of landscape photography. It is his desire now to be able to more leisurely drive the roads of Wisconsin without the pressure of a specific appointment to keep or schedule to meet.